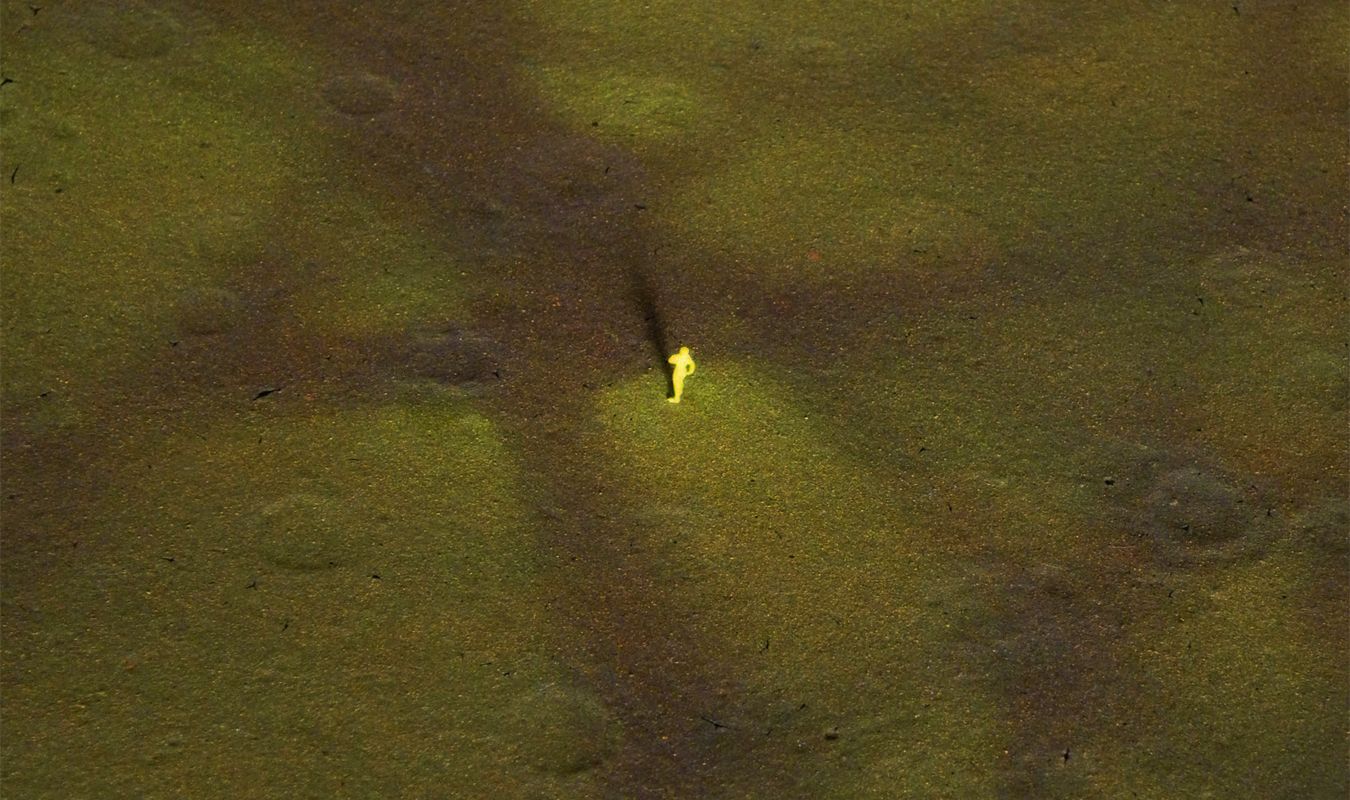 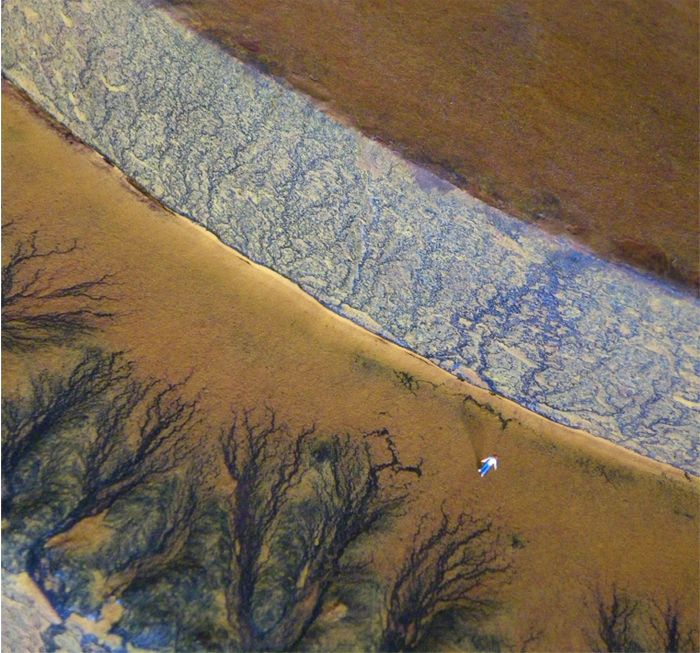 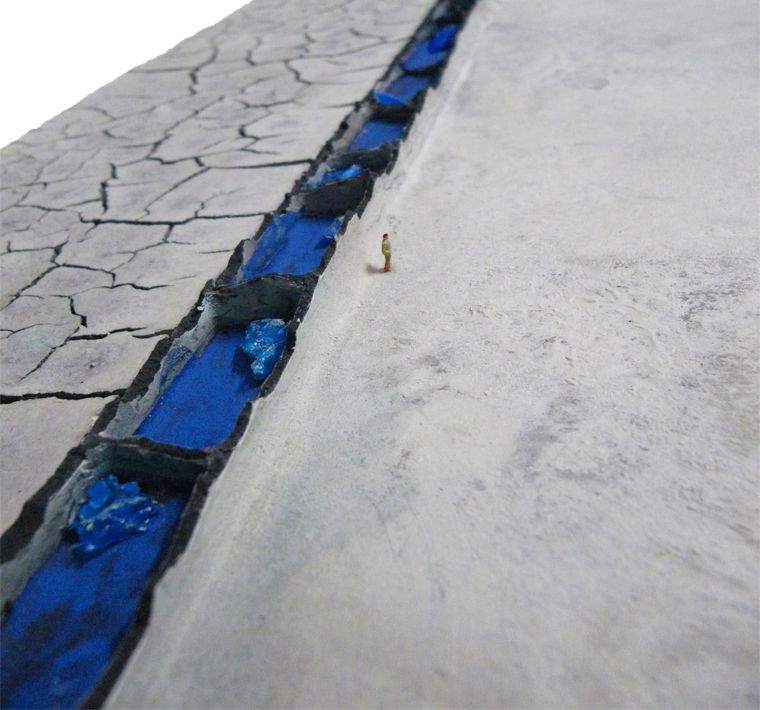 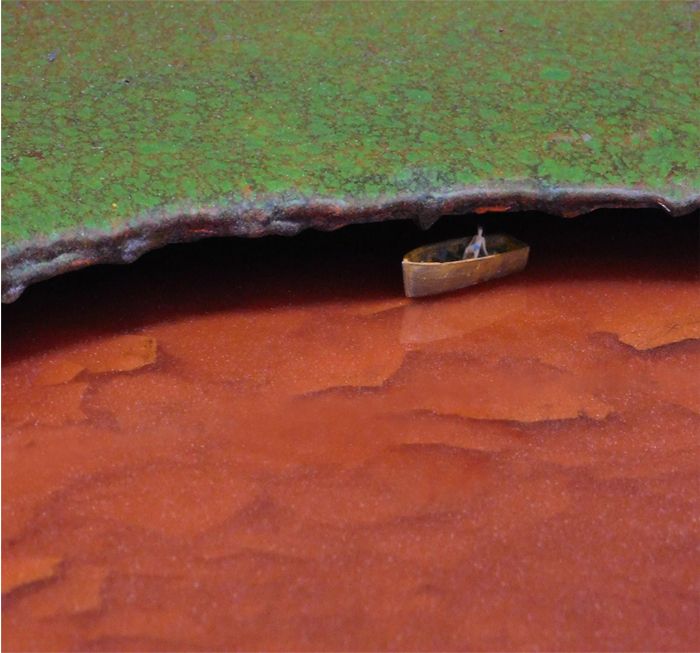 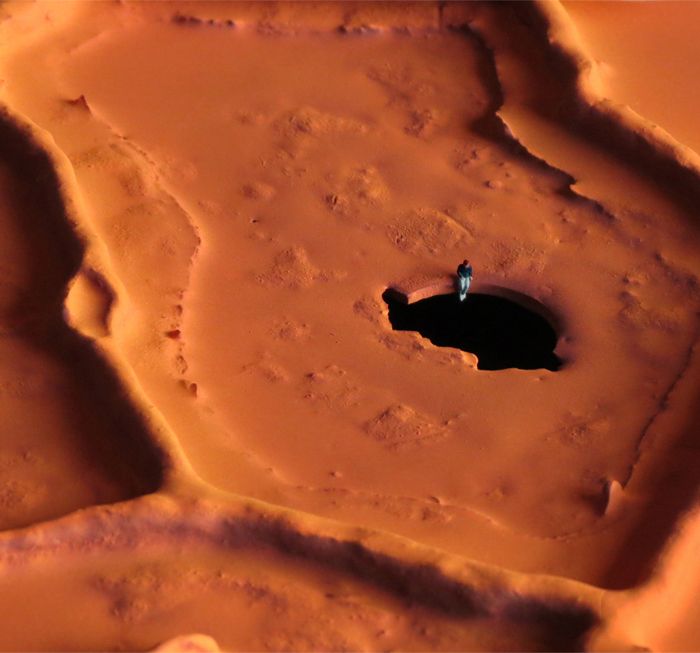 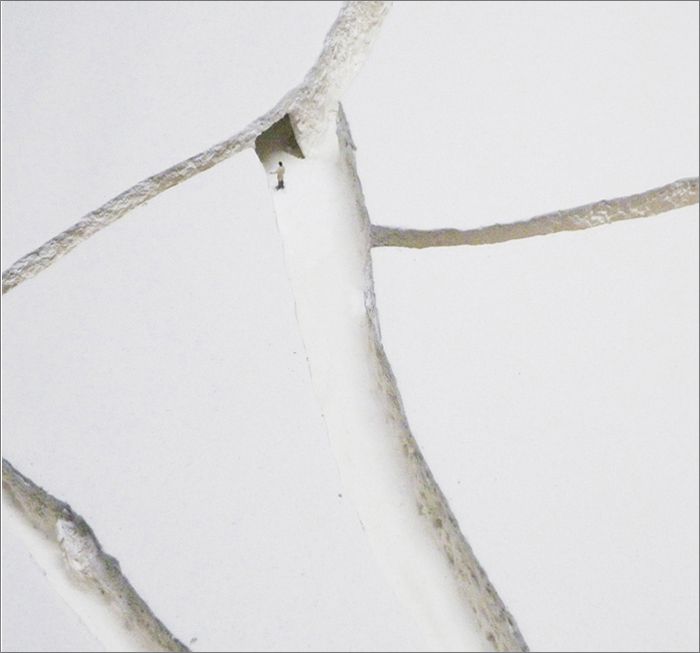 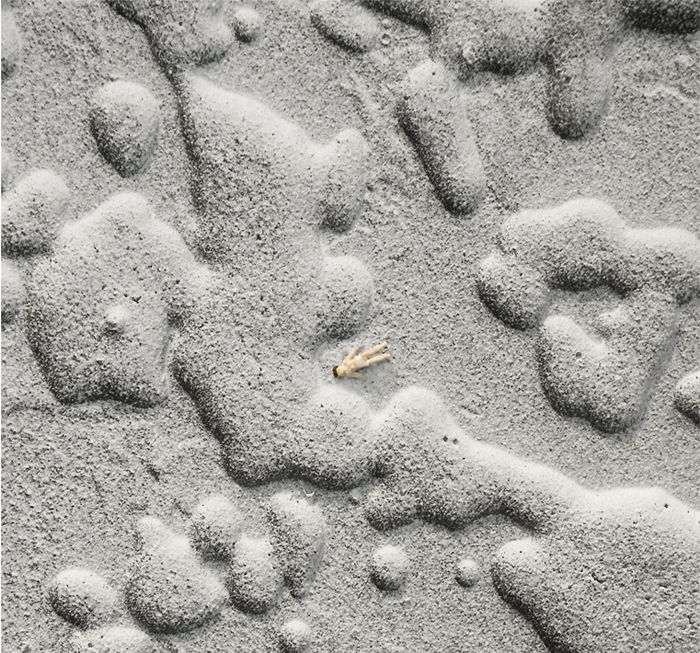 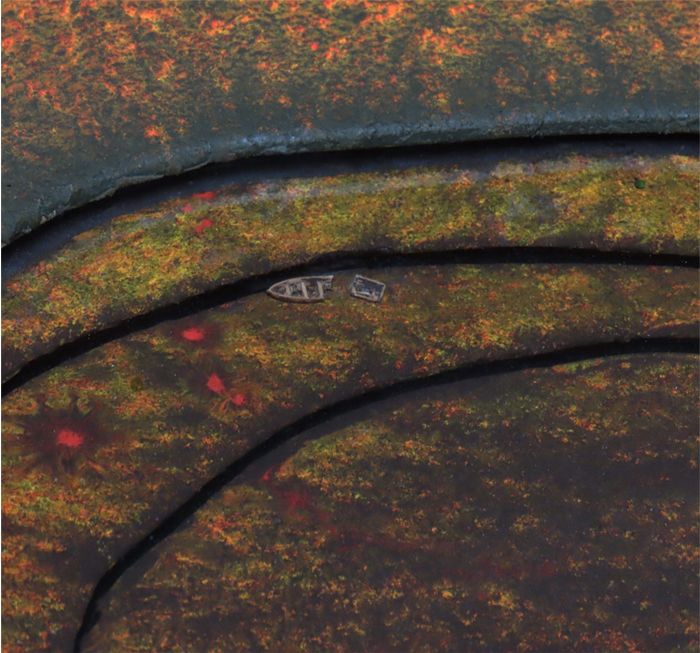 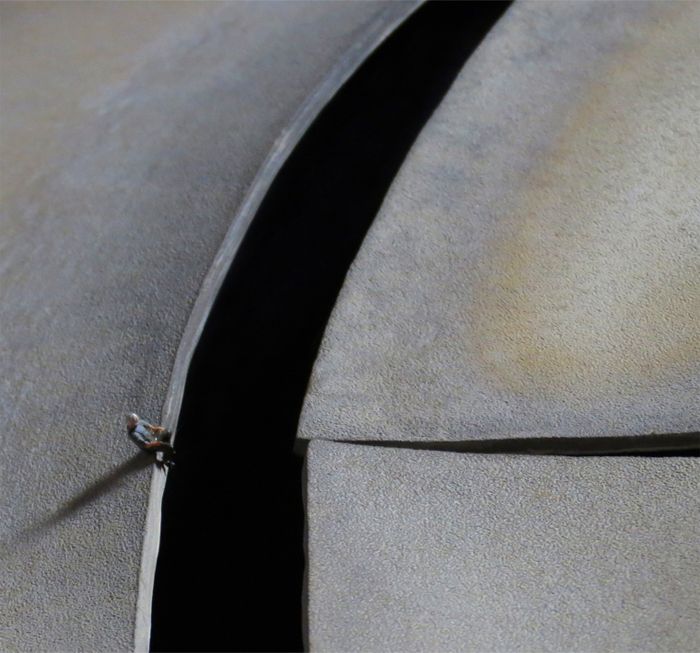 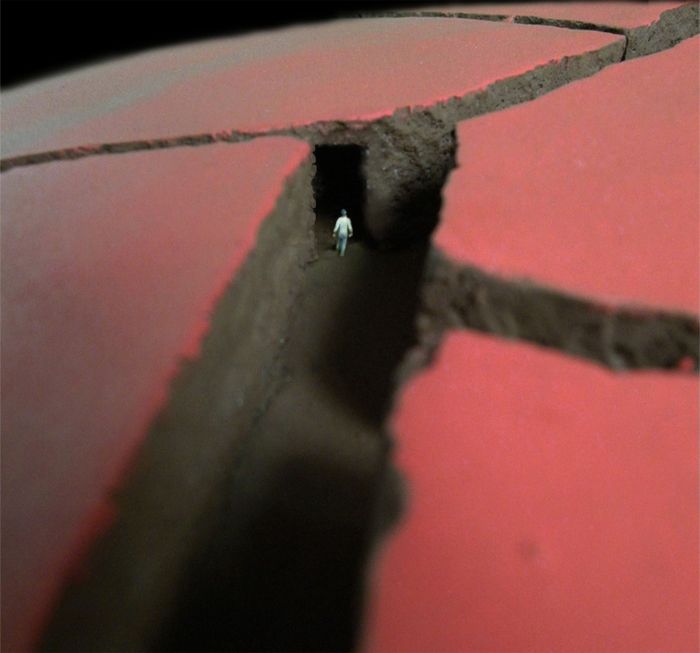 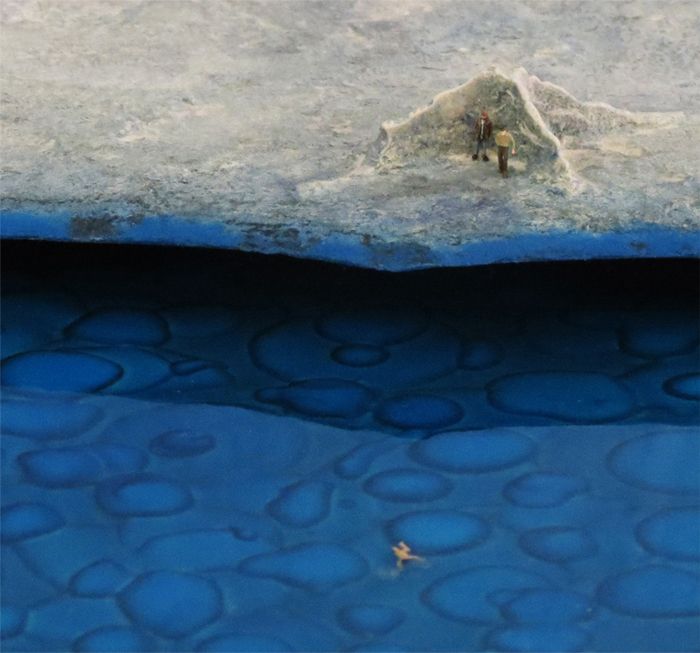 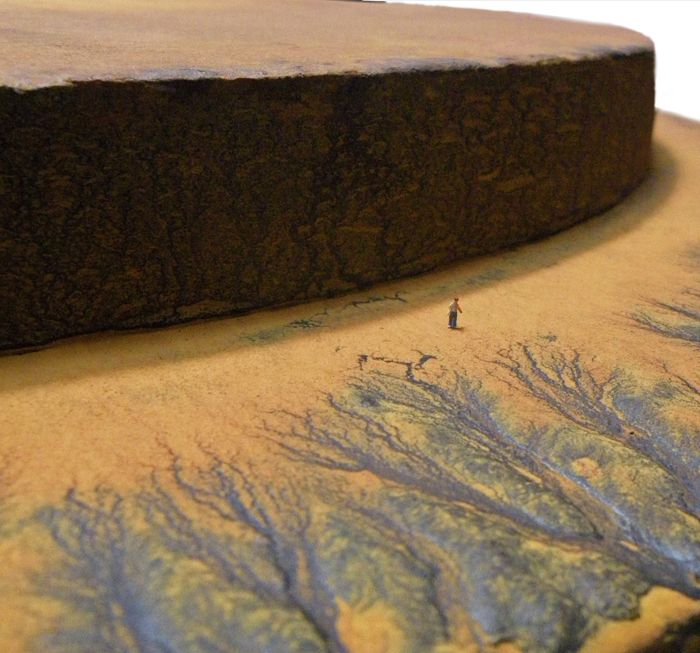 Nature seeps into art through the materials that make it possible. From this point of view, I am not so much interested in “pictorial matter” as in the strict sense of the word, but rather in the element itself. This is how matter is introduced into my work: firstly,through the addition of pigments, and lastly through their subtraction. My works are generated following a parallel process to that of nature in the conformation of its textures and forms. The four natural elements – water, earth, fire and air – are the components that serve as the basis for the creation of my “pictoesculturas”. The mineral pigments and the lands I choose are eroded and transformed into the work through these tools. It is the only way to create something natural and which appears to be unaltered by man.

Like poetry, my work is conceived in a world of ideas; but unlike poetry, it doesn’t use words but rather appeals to natural elements to reproduce a new natural reality. I’m looking to create something that is real in itself; that doesn’t require any type of explanation. It is about bringing to life the invisible forces that govern Mother Nature —extractingher essence. Nature isn’t abstract, each element is designed to carry out a corresponding purpose. It’s role in our life is hard to predict. Why are certain shapes drawn in the sand and not others? Where is the secret that makes the mud crack, forming clear geometric and proportional figures?

I confess that inspiration rarely strikes me when working. When I am commuting, I only have to concentrate for the images to appear in my head and engrave themselves on my retina. Afterwards, I develop a more appealing idea in my mind and resolve the technical issues that occur when translating them into three dimensions. After jotting these ideas down, I then save them for a future project.

My favourite base material to use is wood. It allows me to carve it before working on it and it is sufficiently resistant to hold a large amount of material and water. The making of the wooden frames is a very important step for me, since during this stage I can sculpt the “skeleton” that will later carry the “skin” of the artwork: the pictorial layer. A highly elaborated frame of the appropriate size and model will define how the paint and the canvas merge into one. The paint and clay used for painting and modelling are also of my own manufacture, thus certain of their origin and purity. The pure powder pigments are hydrated with water and ground in the mortar to later be mixed with vinyl or acrylic resins. Through this method, I can vary the proportions to get a round crackle, mineral crystallizations or a subtle velvety surface. The modeling of the compositional forms of the work is done with vinyl clay on the wooden frame.

But it´s not all about control and supervision. There is also a notorious space reserved for luck… When the paint is mixed and the frame is ready, all that´s left is to provide the right environment for everything to happen. The music chosen for the execution of the work is a primordial factor in its development, as well as in my conception of artistic work. This is a moment of great excitement for me: the one in which the work creates itself. It´s clear to me that the work is something different from myself, separate from me. I give it the freedom to be what it embryologically already is. The artist is only the medium.

I don’t think I would trade this experience for anything. It’s the one that encourages me to keep creating and the one I wanted to share with the audience in my occasional live performances. The emotions provoked by attending the birth of a new three-dimensional piece, as alive as reality itself, are the triggers in those moments of the longed-for catharsis. When this happens, we are immersed in a state of mental and spiritual purification.

If one thing is clear to me in those moments, it is that creation responds to my life, and my life, to creation. After many years of technical preparation, and having briefly passed through most artistic styles, I consider that this is the line that best suits my personality and the one in which I am fully realized. Only by being a perfectionist with certain material and technical aspects of the work, can I allow myself to give free rein to my emotions and throw myself into the void.

Sometimes, some of my pictoesculturas are inhabited by a human presence or by signs, fragments or constructions that the human being has left behind. They are figures at a scale of 1:220 or 1:160. The scale is a crucial part of the content of the work, because, thanks to it, we are shown oversized. Nature then reveals itself in its true dimension.

This “little observer” contemplates the surroundings in absolute solitude—interacting with Nature. They will be able to feel sublimated or to eventually fight against it, not to let themself be dragged by the force of the elements. Under certain circumstances, they will appear as a passive spectator, while in others, they will become a victim of the surrounding environment. The traces that this little adventurer leaves in the artwork are hardly noticeable, which will lead us to speculate about their avatars and destiny. However, at other times the intruders appear inhabiting the interior of some polyhedron, like a pharaoh inside its pyramid.

This tiny human presence goes almost unnoticed in the eyes of the real spectator, who sees the work from a certain “respectful” distance. Thus, the observer will resemble a God who contemplates their creation from above; and the “little observer” will, in turn, become an “observed observer”.